Jon Brion, the Glen Ridge, New Jersey, -born pop genius, has been based in Los Angeles for many years and rarely performs anywhere else — sticking mostly to the legendary club Largo.

But Brion, who’s worked with important musicians and filmmakers including Fiona Apple, Elliott Smith, Robyn Hitchcock, Judd Apatow, Aimee Mann, Of Montreal, Best Coast, and Paul Thomas Anderson — makes the trek back East every to put on a show once in awhile.

This year is one of those times. 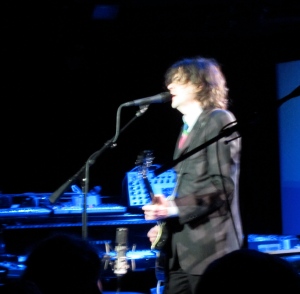 He was at the Brooklyn Academy of Music opera house on Saturday night, joining the Wordless Music Orchestra as it performed his original score to accompany a big-screen presentation of the 2002 Anderson film “Punch-Drunk Love,” which stars Adam Sandler and Emily Watson. (He’s also written scores for “Magnolia,” “Eternal Sunshine of the Spotless Mind,” and last year’s Amy Schumer vehicle, “Trainwreck.”)

He sat in the rear, practically under the screen and pretty far out of view, but took a big bow at the end.

I bemoaned the fact that he was such a small part of the fantastic evening. But seeing and hearing him at all was better than being deprived of his massive talents altogether.