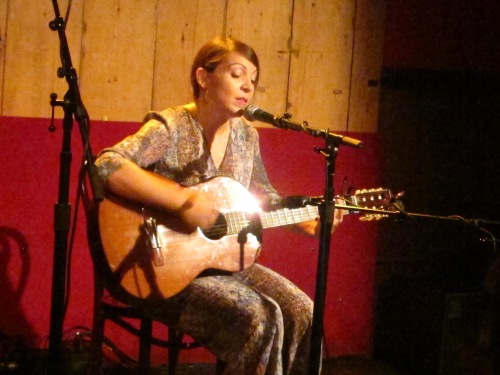 If you’re a curiosity seeker who decided to check out singer-songwriter Amy Bezunartea because you heard — or heard about — the NSFW lyrics in her new single, “Oh the Things a Girl Must Do,” good for you.

But stick around, there’s more — a lot more  — to this artist than one line that incorporates slang for vagina:

NPR’s “All Songs Considered” praises the work while falling all over itself to call out the song’s frankness, using “graphically” in its headline. As if that weren’t enough, the NPR post also carries the warning label “LANGUAGE ADVISORY: This song contains sexually explicit language,” and uses the terms “a shocking turn” and “NSFW (not safe for work)” in the text.

I thought Liz Phair had inured pop audiences to such things with “Fuck and Run” from “Exile in Guyville” — the only thing she made that’s worth listening to.

Clearly that’s not the case. A very audible titter passed through the audience when Bezunartea sang the line at Rockwood Music Hall on Tuesday night.

To me, whatever shock value that line might have is the least important reason to check out Bezunartea. Her forthcoming album “New Villain,” features 10 fantastic songs that deal — often darkly — with issues of need, desire, and self-affirmation. The spare arrangements put her incisive lyrics front and center.

In performance Tuesday night, Bezunartea spent her 30-minute set seated, accompanying herself on a classical guitar, stripping the album’s already spare arrangements down to the bone and gristle of the work. She sang with airy grace and beauty, injecting lots of sonic space in which her  words and music reverberated.

I suspect Kiam’s two “shockers” in a row constitute a coincidence rather than a strategy — but I don’t know for sure.

What I do know for sure is that the songs on the Rockland County-based Bezunartea’s sophomore album (her debut, 2010’s “Restaurants and Bars,” also is on Kiam) hit hard and stick with you for a long time.

Bezunartea has one New York area show scheduled in October, after the album drops, with more likely to come:

One response to “Amy Bezunartea: Pop hero or new villain?”