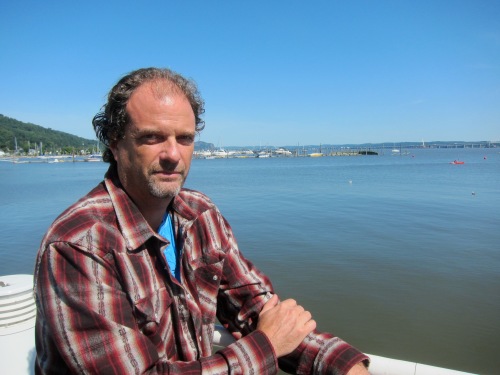 When I met Jamie Block for the first time, back in 2013, the onetime anti-folk singer-songwriter he was on the comeback trail. The longtime Rockland County resident had gotten through a difficult time in his life. By his own account, he had hit bottom and found his way up again before releasing the impressive “Whitecaps on the Hudson,” his first album in seven years.

His effort to promote that album led to a relationship with Brooklyn filmmaker Onur Turkel, which at first apparently was intended to produce some music videos. But things blossomed and what resulted is a full-length comedy, “Abby Singer/Songwriter,”  starring Block, daughters Johanna and Sophie, and the filmmaker. And you’ll be able to see it here in the New York City area for the first time next week.

I’ve seen clips, which are quite funny, but haven’t seen the finished product yet. So here’s a description of it from a film festive website:

A comedy with real heart, Abby Singer, Songwriter tells the tale of a filmmaker and a musician who meet and start working together in a union that at times seems the most ill-fated creative partnership in history. Luckily for us, it’s also one of the funniest, as terrible music video ideas come to life, recurring jokes land perfectly and don’t hold back on political correctness and the film builds layer upon layer of character driven conundrums to form its perfect NYC-set universe. Featuring real-life musician Jamie Block and real-life director Onur Tukel playing fictionalized versions of themselves, the film is a throwback to great independent films as a unique story and structure pay off in spades. As Jamie tries to survive Onur and make a real connection with his daughters he must also face the prospect that the two things are becoming increasingly, hilariously intertwined.

It’s making the rounds of film festivals now, and has three screenings in Brooklyn starting with two slots at the Brooklyn Film Festival next week, plus a showing at Brooklyn’s Northside Festival the following week.

The first screening is at 10:30 p.m. on Wednesday, June 3, at Windmill Studios, 300 Kingsland Ave, Brooklyn. Go here for  more information and to buy tickets.

The movie will also get one screening at the Nitehawk on Wednesday, June 10, as part of the Northside Festival. Go here for tickets and information.

Check out a clip from the movie by tapping or clicking here.

His return to music hasn’t resulted in a lot of live performances, but he’s playing at screenings, and also is booked for his first gig of 2015 at an arts festival in Haverstraw, which he calls home. The schedule hasn’t been posted yet, but Block is slated to appear July 11 at the Haverstraw RiverArts & Music Festival, which is in its second year.