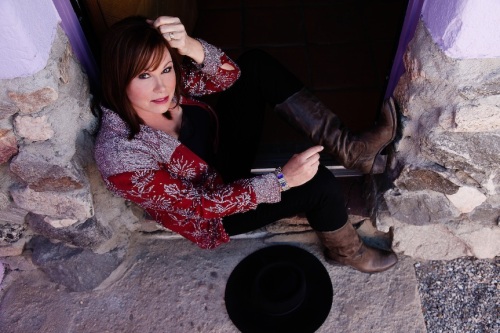 If you even half paid attention to country music in the late 1980s and early 1990s, the name Suzy Bogguss will surely ring a bell.

She was on fire, releasing one platinum and three gold albums, along with six top 10 country singles. She was named top new female vocalist of 1988 by the Academy of Country Music, and won the Country Music Association‘s Horizon Award in 1992.

After taking a few years off after the birth of her son, Ben, in 1995, Bogguss returned with a decidedly folkier, indie approach to her craft. It’s kept her flying a little farther under the radar of mainstream country music, but hasn’t prevented her from having a decent career of touring and recording.

After Ben’s birth, “I was only doing about 40 to 45 shows a year when he was in his younger years,” Bogguss tells Will You Miss Me When I’m Gone?  “Now I’m really having to rebuild a lot and just let people know I’m still out there playing… I never really went away.”

On Saturday (March 28), her tour brings her to the Hudson Valley, where she’ll play at Daryl’s House, rocker Daryl Hall’s club in Pawling, New York.

It’s a good thing she didn’t disappear. Her latest album, “Lucky,” is a collection of 11 well-chosen and beautifully performed versions of songs by honky-tonk legend Merle Haggard, one of the originators of the swinging Bakersfield Sound.

Casual listeners may know Haggard best for the 1969 hit “Okie From Muskogee.” Bogguss’ collection omits that tune, and yet it’s still crammed with familiar numbers, including “Today I Started Loving You Again,” “If We Make It Through December,” and “The Bottle Let Me Down.”

At age 58, Bogguss sounds like an artist who’s enjoying her career more than ever, even side of being an independent artist who has to lug her equipment around without a road crew

“In my head, I still look like I’m 21 doin’ that,” she says. “But then I think about how ridiculous it must look to see a 58-year-old woman schlepping her gear around like a teenager. I think that’s probably pretty funny to some people, but for me, it just feels like, ‘Hey, that’s what I do.’

“I’m a working musician. We schlep our stuff through the airport. Sometimes I actually find myself with a giddy, stupid smile on my face walking through the airport with my guitar on my back going, ‘Yeah, I got a good job,'” she adds with a laugh.

“I know what I’m doing, I choose my own gigs, I make my own choices, and I really like that a lot.”

‘Glad I’m not doin’ that anymore’

She says she’s reminded that she doesn’t miss her days of mainstream country stardom when she watches the ABC prime time soap opera “Nashville.”

“It doesn’t compare to the life that I have now, but it does compare to the life that I had in the ’90s. A lot of that stuff is true, especially when you get to the drama of record labels, and publishers, and just the everyday ‘I need to think of something that will make me be in the public’s eye.’ Like, ‘Here’s a new recipe for dip,’ you know. ‘What can I do to get people to look at me right now,”’ she says.

“That gets old, that really gets old — especially people coming to your house and showing you racks of clothes and sticking makeup brushes in your face every second. I feel for them when I see that stuff on the show. I go, ‘Oh, I’m glad I’m not doin’ that anymore.'”

While she’s always been what she calls an “eclectic” country artist, making an all-Merle album was a bit of a risk, but one that was probably inevitable. It certainly got fan financial support, with 964 backers kicking in at total of $75,211 on the album’s Kickstarter campaign, which had a goal of $50,000.

But she admits that some fans have been a little leery of the idea of her doing Haggard songs.

“Some of my fans are going, ‘Honky-tonk music, that’s not what we’re used to from you.’ But then when they hear it, they’re like, Oh, that’s a Suzy Bogguss record, not a Merle Haggard record. Sometimes you have to get over those little perception hurdles. But, all in all, once they hear it, they’re delighted,” she explains.

Her own connection to Haggard deepened as a result of making the album.

“My first song that actually got on the charts was a Merle Haggard song. It’s called “Somewhere Between,” and that was my first album title on Capitol. So I already had an affinity for him from my youth,” she says, adding that the process of making the album gave her a deeper appreciation for Haggard’s music.

“Listen to what an amazing craftsman this guy is,” she says. “I think I came out just thinking, wow, before, I always thought Merle Haggard has a gift, he can just sit down and write these songs that sound like this happened to him last night and it’s real easy for him.

“But as I got into arranging the songs, and these melodies and stuff, I was like, this is not easy stuff. He has worked his ass off to hone these things down to where there’s not one extra word in there.

“Half the time he didn’t even sing the chorus twice. He would just go, ‘OK, here’s a 2-minute song that’s gonna break your heart. Listen to this.'”

Album of originals up next

The experience also challenged her to do more songwriting herself, with husband Doug Crider.

“We took all of January off and we’ve been writing like crazy,” she says.  “I really got inspired by doing these Merle arrangements to go back and really hone my songwriting chops again. I will probably go back in at the end of the year and cut an album of all originals.”