The first time I listened to the latest album from Holly Golightly & The Brokeoffs, All Her Fault, I was left wanting more Holly and less Brokeoffs. There was something about Golightly’s albums from her early days as a solo artist (post-Thee Headcoatees) in the 1990s that really touched me.

Maybe it was her damaged, smoky vocals or her equally damaged-sounding persona. Or maybe I simply liked her voice.

But all that seems buried in her latest release. I wanted more Holly.

But maybe that’s exactly the idea — to leave the listener wanting more. It takes a bit of active listening to get to that, but the eureka moment is well worth the effort. Itstrikes me as more personal and less superficially accessible than those that came before. But it winds up being a brilliant, honky-tonk-inflected personal statement of a pretty together couple.

That idea came to mind when I saw Holly and Lawyer Dave (I’m sure somebody out there knows his real name, but I haven’t come across it yet), who essentially is The Brokeoffs, played New York City’s Mercury Lounge on Monday night. The pair’s collaboration results in something more than Holly can do on her own.

While it’s not the first time I’d seen Holly & Dave perform, it was the first time in such an intimate setting as the Mercury (last time was the Bowery Ballroom, as I recall,  a couple of years or more ago). And seeing them up close, with Holly on vocals and guitar and Dave on guitars, jury rigged, foot-powered percussion and vocals, it suddenly came into focus. They have become a real team over their years of performing and living together in the Red Clay region of Georgia. 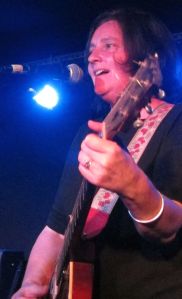 Their life together informs their songs, although, I would hope, not literally — Dave introduced one of the songs as being about domestic violence, and another about the time Holly tried to run him down with his pickup truck. And Holly spoke of the suspicious neighbor who’s sure that she and Dave are up to no good, and determined to find out their “real” names.

When not touring and recording — “We’re really lazy about music,” says Dave — the pair run a horse rescue operation, Camp Esco Horse Rescue. Why horses? Well, apparently, Holly apprenticed as a jockey years ago. And while that didn’t work out, she never lost her love of the noble beasts she rode.

Lawyer Dave (aka The Brokeoffs)

Amid the songs, some older (“Escalator” and “Burn O’ Junk Pile, Burn”), some new (“SLC” and “Pistol Pete”) Holly and Dave exhibited signs of a couple completely in tune. They appeared to communicate with glances and relatively few words, finishing each others sentences.

Their set was solid and played with elegance and grace — words that perhaps aren’t often applied to honky tonk. But they managed to do it.

The only noticeable disagreement appeared to be on the subject of hair. Dave asked the crowd if they liked Holly’s new, just-off-the-shoulder cut. She said the locks just “laid there like a dead animal” on the floor after the cut, and insisted, jokingly, that the hair had been “holding me back.” But when she offered her advice to anyone with long hair to cut it, Dave — who has epic facial hair and braid that extends to the middle of her back — shook his head in disagreement.

Britain-born Holly (yes, her mother really named her Holly Golightly) also has a day job in a law office. What, if any, relationship that has to Texas-born Lawyer Dave is  a mystery to me.

And that’s OK with me. 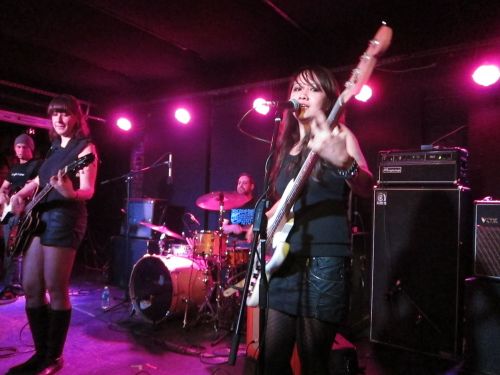 Brooklyn’s Party Lights did a spirited job of opening for Holly Golightly & The Brokeoffs.