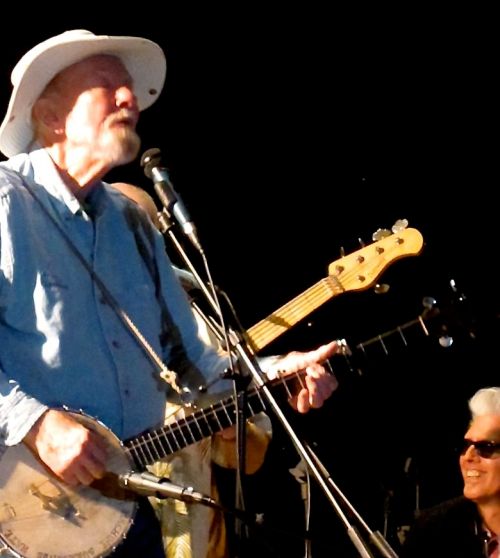 He continued to work after Toshi’s death, appearing in September at a Farm Aid Concert in Saratoga Springs, reports Peter Kramer of The Journal News in a wonderful obituary posted on lohud.com. (Be sure to check out the great video on lohud.com, including this raw footage of a rambling interview at Seeger’s Beacon home.

Many thanks, also, to Kramer for posting a wonderful Seeger playlist.

People who came of age in 1970 or later, especially those raised in or near the Hudson Valley, may know Seeger best as the environmental activist behind the Hudson River Sloop Clearwater and the Great Clearwater Revival festival or the  environmental organization bearing the sloop’s name. (A word of caution: clearwater.org was getting heavy traffic after the news of Seeger’s death broke, so you can expect to have trouble logging onto the site.)

But he was an integral is rekindling a national interest in folk music. His attenuated voice and banjo became a fixture on national radio beginning in the 1940s.

Seeger’s presence will be missed, but death won’t silence his voice.