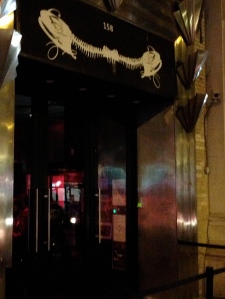 LPR is one of New York City’s leading music venues, featuring everything from rock and folk to classical. But from its inception, LPR has been a champion of modern classical music, or so-called New Music.

Muñoz takes the baton just as the ensemble is preparing its final concert of  2012 as it accompanies British composer-performer Max Richter in the U.S. debut of his “Vivaldi Recomposed: The Four Seasons,” with violin soloist Daniel Hope.

Two performance of “Vivaldi Recomposed” are scheduled at LPR next month. Click here for more details and tickets.

“Ensemble LPR is a special voice in the music world; an ensemble capable of performing anything, breaking barriers and genres,” Muñoz said in a statement released this morning. “I am excited to bring my passion for versatility and artistic excellence to the group, and look forward to all of our future musical adventures.”

The ensemble is now preparing plans for its first full season, to be presented late in 2013.

The ensemble also announced this morning that pianist-conductor Orlando Alonso and Ronen Givony (LPR’s  music director and founder of the Wordless Music Series) will be co-artistic directors of the ensemble.

From the LPR news release:

About Tito Muñoz
Tito Muñoz is increasingly recognized as one of the most gifted conductors of his generation. Recently appointed Music Director of the Opéra National de Lorraine and the Orchestre symphonique et lyrique de Nancy, he previously served a three year tenure as Assistant Conductor of The Cleveland Orchestra. Prior to that, he served as Assistant Conductor of the Cincinnati Symphony Orchestra and the Cincinnati Chamber Orchestra.

An alumnus of the National Conducting Institute, Mr. Muñoz made his professional conducting debut in 2006 with the National Symphony Orchestra. That same year, he made his Cleveland Orchestra debut at the Blossom Music Festival at the invitation of David Zinman. The 2006-2007 season included a critically acclaimed subscription debut with the Cincinnati Symphony Orchestra, stepping in for an ailing Krzysztof Penderecki. He made his European debut with the Orchestre Lyrique de Région Avignon-Provence in fall of 2007.

In recent seasons, Mr. Muñoz made a critically acclaimed subscription debut with The Cleveland Orchestra, a return subscription appearance with the Cincinnati Symphony, and debuts with the Atlanta, Houston, National, Indianapolis, Milwaukee, Detroit, Grand Rapids, Eugene, Princeton, and Hartford Symphonies and the Mexico City Philharmonic. Other recent and upcoming engagements include return performances with the Detroit, Pasadena and Toledo Symphonies, and the Brandenburgisches Staatsorchester Frankfurt, and subscription debuts with the symphony orchestras of Phoenix, Columbus, Alabama, San Antonio, and Kitchener-Waterloo as well as The Florida Orchestra. Debuts in Europe have included the Lausanne Chamber Orchestra and the Opéra de Rennes. Mr. Muñoz continues his relationship with The Cleveland Orchestra in collaborations with The Joffrey Ballet and Miami City Ballet, and most recently for subscription performances as a last-minute replacement for an ailing Pierre Boulez.

A native of New York City, Mr. Muñoz trained at Queens College (CUNY) as a violin student of Daniel Phillips and at the Aspen Music Festival as a conducting student of David Zinman. He attended the Juilliard School’s Music Advancement Program, Manhattan School of Music’s Precollege Division, and LaGuardia High School of the Performing Arts. He resides in Astoria, Queens.

About Ensemble LPR
Ensemble LPR is an elite assemblage of the finest New York-based concert musicians, personifying Le Poisson Rouge’s commitment to aesthetic diversity and artistic excellence. Members of the ensemble are graduates of the world’s most prestigious conservatory and university programs, and amongst other appearances have performed at the Marlboro and Aspen Festivals and as soloist with The New York Philharmonic and The New Jersey Symphony. There is no instrumentation too large or too small for the ensemble — ranging in size from duo to large orchestra — whose unyeilding standard and rigorous devotion is to the music of the world’s finest living composers as much as it is to the common practice period of classical music, and whose collaborators include the world’s leading soloists as well as renowned artists of non-classical backgrounds

In 2008 Le Poisson Rouge changed the classical music landscape, creating a new environment in which to experience art music and in so doing expanded the classical music listenership and pushed the popular palette in all directions. The New York Times heralds LPR as a “forward-thinking venue that seeks to showcase disparate musical styles under one roof…artistically planned eclecticism” and “[t]he coolest place to hear contemporary music,” and the Los Angeles Times raved “[t]he place isn’t merely cool…the venue is a downright musical marvel.” With Ensemble LPR, the minds behind Le Poisson Rouge — co-founders and musicians David Handler and Justin Kantor — bring this same ethos to the creative forefront, bringing the same daring and merit to its own artistry.

About Orlando Alonso
Cuban born pianist and conductor Orlando Alonso has already established a flourishing international reputation through his orchestral and recital performances in North America, South America and Europe. Noted for his challenging programs, artistic maturity and versatility, his repertoire ranges from Bach, Mozart and Beethoven through the Romantics, Liszt and Brahms, to works by contemporary composers.

Winner of the Amadeo Roldan Piano Competition in Havana, the Sant’ Agata li Battiati in Italy, the Frinna Awerbuch International Piano Competition in New York, he was also the recipient of the Harold Bauer Award, the highest honor bestowed upon a graduating student at the Manhattan School of Music.
Orlando Alonso studied with Jorge Luis Prats at the Havana Conservatory, Herbert Stessin at the Juilliard School and with Zenon Fishbein and Horacio Gutierrez at the Manhattan School of Music.

About Ronen Givony
Ronen Givony is the founder of Wordless Music, a concert series that pairs rock and electronic musicians with classical music performers, both in New York and select cities internationally. To date, the series has featured appearances from Sigur Rós, Andrew Bird, Deerhoof, Beirut, Four Tet, Explosisions in the Sky, Müm, The Books, Grizzly Bear, Brad Mehldau, Destroyer, Broadcast, Rhys Chatham, Do Make Say Think, and Stars of the Lid, along with the music of Perotin, Bach, Haydn, Debussy, Stravinsky, Messiaen, Ligeti, Steve Reich, John Adams, Arvo Pärt, Brian Eno, and Jonny Greenwood of Radiohead. The series was the recipient of the 2008 Village Voice Best of NYC Award for “Best Moderately Snooty Concert Series.” In addition to his concerts with Wordless Music, Ronen is one of the two Music Directors of the music venue Le Poisson Rouge in Greenwich Village, where he produces the club’s classical, electronic music, and indie rock programming. He is also a former employee and regular contributor of liner notes for Nonesuch Records. Ronen completed his BA and MA in English Literarture at Yale University and is a native of South Florida.