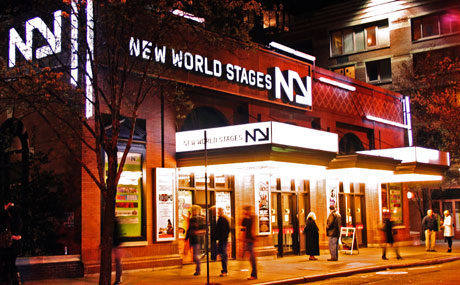 ‘No conversations’ about staging the Kander and Ebb musical, says NWS managing director

When we reported the news that one of the producers of The Scottsboro Boys publicly proclaimed the show was returning soon to an NYC stage, Will You Miss Me When I’m Gone? offered it with a grain of salt.

It’s a good thing, because the the people at New World Stages, the house specifically named by the producer, are denying shooting down the idea — at least for now.

Michael Coco, NWS managing director, got back to us with this response:

Currently, all five theaters at NWS are filled with successful productions all with open ended contracts. We do not anticipate any changes in our programming in the near future.

We followed up with Coco on this to clarify further.

Naturally, with a full house, Coco needs to avoid offending producers of his existing shows while looking ahead to the inevitable need for change. So we asked whether he had ever spoken to the producer in question, or anyone else connected with The Scottsboro Boys, about such a move. Coco replied:

Not intending to say that anyone was being untruthful nor if they have the intentions to speak to me in the near future, but I have not had any conversations about The Scottsboro Boys playing at New World Stages at any time in the future.

Is that the definitive answer? Hard to say, but it seems like we won’t be seeing John Kander and Fred Ebb’s fascinating, unsettling musical comedy about a key moment in the history of American race relations on the boards at NWS soon. (It was one of Kander and Ebb’s final collaborations, and didn’t make it to Broadway until six years after Ebb’s death.) If you have a real hankering to see it again, you can catch it on the West Coast over the next couple of months, first in San Diego and then in San Francisco.

We know what the producer said, and, while we didn’t immediately recognize him, we have confirmed his identity beyond a shadow of a doubt.

Was his statement about opening at NWS an empty boast? Was he getting ahead of himself? Did something go wrong? Was he mistaken about where the show will be mounted?