Who knows when they’ll play again 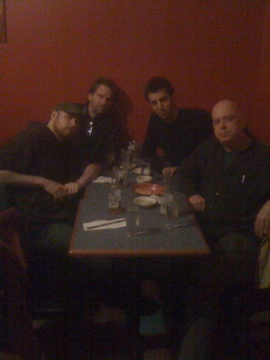 Q. Did you hear the one about the Pulitzer Prize finalist, the Guggenheim fellow, one of the leading new music percussionists and a Dutch Jazz Competition-winning bassist got together to make some garage rock?

A. Big Farm was born. 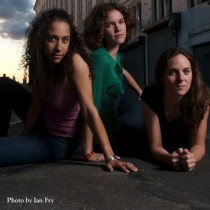 Never heard of Big Farm? Go to Public Assembly at 70 North 6th St., Williamsburg, Brooklyn, at 8 p.m. on Saturday, April 7, and you’ll never forget them. (They’re on a bill with Janus Trio, a great Brooklyn-based flute-viola-harp trio.) Admission is $10 at the door.

Time Out NY has called Big Farm “something like a Blind Faith-style supergroup,” given the accomplishments of the individuals in the band. Jason Treuting, the drummer, is perhaps the most recognizable member of the versatile percussion ensemble So Percussion. Steven Mackey, the sizzling lead guitarist, is a former Guggenheim fellow, a Grammy winner and an accomplished New Music composer. Bassist Mark Haanstra is an incredibly talented jazz player from the Netherlands. And Rinde Eckert, the vocalist, was a finalist for the 2007 Pulitzer Prize for his “Orpheus X” and also a Guggenheim fellowship. 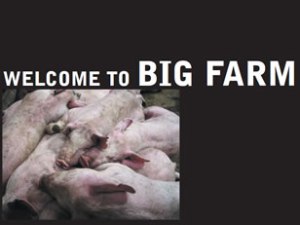 Will You Miss Me When I’m Gone? got a chance to chat with Eckert about Big Farm the other day.

“Big Farm started about 5 years ago,” Eckert says. “I basically proposed the idea to Steve [Mackey]. There were things we just couldn’t do ion any other format, things we needed a small combo for.”

You could call it an outlet, if you like. “But we’re pretty serious about our outlet,” Eckert says. “It’s not like a weekend band that just wants to get their rocks off.”

Eckert, who got his start in San Francisco, but moved to the New York City suburbs of Rockland County in 1995, mainly works in contemporary opera, with serious, small-cast shows like “And God Created Great Whales” and “Horizon.” But he admits he’s never really been able to tune out the call of rock and roll.

“I was always interested in that world,” he says. “And something about it just continues to call me back.”

He said he was in a blues band and some short-lived rock ensembles years ago, before he studied opera and New Music. “None of my bands seemed to last very long.”

So while the talented quartet clearly sees Big Farm as a way to do music that they can’t in their other professional lives, don’t underestimate its ability to fulfill that visceral need to kick out the jams.

“It’s really sexy for Steve to have this outlet for his rock and roll soul,” Eckert says.

Big Farm uses the term “prog-rock’ to describe its sound. But don’t assume this band sounds anything like Emerson, Lake & Palmer, King Crimson, or other bands from decades ago that are associated with the term. Big Farm defines the genre in its own way.

“It has that stamp of rock and roll” because of the rather conventional linuep of singer, electric guitar, electric bass and trap drums, Eckert explains. Oh, and of course, “the screaming guitar solos.”

The melodies, arrangements and lyrics (which at times touch on cell phone ringtones and cookie dough), are very contemporary in a New Music sense. But “it’s easier to call it rock and roll and go toward New Music,” Eckert said.

CD is on the way

The band has a few tracks on its ReverbNation page, and a cursory Google search will turn up some other live mp3’s and videos. But Eckert promises Big Farm will release a CD — eventually.

“We have a lot of stuff in the can. We just got a lot of the tracks laid down,” Eckert says. “It’s just ended up being a little more elaborate” than originally planned. So it’s taking a bit more time.

We shall see about the recording. But in the meantime there’s public performance, however rare.

In the five years the band has existed, its played live just twice. In fact, Saturday’s show will be Big Farm’s third gig — “our seemingly annual concert,” as Eckert calls it.

“Part of it is just scheduling. Just finding time when we can perform” is a big challenge for the four extremely busy band members, Eckert says.”Each time we get together it reinforces our desire to do it more.”

But in the end, “it’s worth the wait for this gang of guys,” Eckert says.

On Saturday, you’ll find that it’s worth the wait for the fans, too.