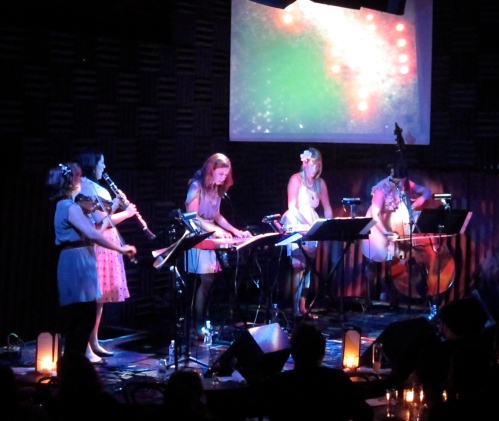 Composer Missy Mazzoli and her band, Victoire, celebrated the Sept. 28 release of their first full-length CD, Cathedral City, on the wonderfully adventurous New Amsterdam label with a show at at Joe’s Pub on Saturday, Oct. 2. The band’s performance made it pretty evident that much of the quintet’s new material isn’t new at all.

That’s not a bad thing. It’s just illustrative of how long it can really take to put together an album — something that Mazzoli, an obvious perfectionist, underscored at Joe’s.

Victoire, an rock-influenced electroacoustic quintet, was founded back in 2008 as an outlet for Mazzoli’s wilder compositions. We first heard the band not long after that, but Victoire really made an impression at the Bang on a Can Marathon in June 2009, on the heels of the March release by eMusic of the band’s A Door Into The Dark E. All four songs from that EP — but different versions — are included on the eight-track Cathedral City. So fully half the CD, including the dark, slightly hallucinatory i am coming for my things, is quite familiar by now.

We didn’t track the set list at Joe’s, but the album is a bit over 45 minutes of music and the show lasted a short hour. That means, if memory serves, Victoire performed the entire album crisply and with great skill.

The compositions — they can’t rightly be described as songs, even though the are rooted more in rock performance style than classical — are serious, studied works. They have melodies topped with lots of classical-style string work all fuzzed up with lo-fi electronics and strong, electronic beats.

Victoire’s current publicity material describes the band as a “chamber rock quintet.” But the band’s aesthetic shatters that notion from the first note. Victoire is clearly rooted in the contemporary classical chamber world. The five members — Olivia De Prato on violin, Eileen Mack on clarinet, Lorna Krier on keyboards,  Eleonore Oppenheim on double bass and Mazzoli on piano, accordion, effects, and anything else she can think of — stand and play. There’s no fooling around. Sure, Mazzoli chats with the audience a bit, but this is mostly serious business. This is not the stuff of rock. But it sure is compelling.