UPDATED: Everybody wins in The Decemberists’ lottery (Now with link to live recording)

UPDATE: Did you miss this show? Check out nyctaper’s recording here.

When the spotlight glared down on the tinsel-bedecked stage-left podium at Terminal 5 last night, the crowd got very excited. It could only mean that The Decemberists were about to hit the stage and get their first set of randomly selected songs to perform in an unusual lottery concert.

For those in the audience who know Wesley Stace (better known to many by his stage name of John Wesley Harding), we recognized that we were in for a rare treat — a collision of sharp wits. And although Wes said he got the call to play MC for last night’s show just hours before he went on, giving him no time to put any material together, he managed to wing it just fine. 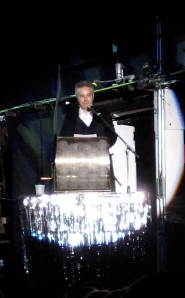 John Wesley Harding says he got a call asking him to be MC for last night's concert just hours before showtime.

To be honest, I was a little iffy about this show. The Decemberists have a tried-and-true formula for most showss — play the latest album for half the evening and older material for the other half. It’s great for superfans, but it can be a bit predictable at times. But when I realized that last night’s show would break that mold — song titles were pulled from a basket, bingo-style and the band had to play them right away, with no cheating — I decided to take the plunge. I sure am glad I did. It was a unique evening, featuring 15 of the band’s songs and capped off by Mr. Blue Sky, an Electric Light Orchestra cover.

Click through to the jump for lots more photos. END_OF_DOCUMENT_TOKEN_TO_BE_REPLACED

More drumbeats along the Hudson

As Will You Miss Me When I’m Gone? reported yesterday, The Bongos are coming back with at least two shows in the NYC area next month. Until that happens, enjoy this video of The Bongos performing a Pylon cover last March at City Winery during the afterparty for the R.E.M. tribute at Carnegie Hall.

Meanwhlile, our friends over at Cliffview Pilot scored an interview with The Bongos’ frontman Richard Barone, in which he talks about the reunion shows and a number of other projects he has in the works. Check out the full interview here.