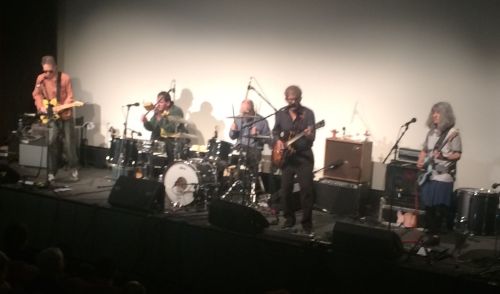 At the Burns Film Center, Demme had his dreams fulfilled without having to stay up too terribly late. The movie ran from about 7 p.m. to just before 9. It took about 20 minutes move the band’s equipment into place,, and Demme used the time to stage an unscheduled Q&A session with the near-capacity audience. 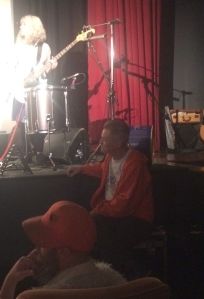 Jonathan Demme at the feet of Feelies bassist Brenda Sauter.

The Feelies took the stage played a solid set — one that had Demme dancing continually — of 15 songs plus encores lasting a bit more than an hour, wrapping up by 10:15 or so.

The Feelies didn’t reprise their cover of David Bowie’s “Fame,” which percussionist Dave Weckerman sang at the center of the high school reunion scene in “Something Wild.” It was a song chosen for the film, and not one that the band, known for including one or more covers in every show, had in its repertoire. Instead, the crowd got a fast, punky version of The Monkees’ hit “I’m a Believer,” which is part of The Feelies’ catalog and also was used in the movie.