Jherek Bischoff remains composed in the face of his heroes 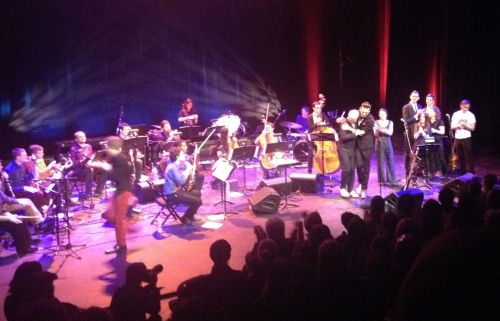 Surrounded by some of the greatest singers and performers at work today, DIY musician Jherek Bischoff managed to remain composed Wednesday night at St. Ann’s Warehouse in Brooklyn’s Dumbo neighborhood.

Good thing, too, since his two-night stand at the black box arts center is titled “Jherek Bischoff Composed,” which also is the title of Bischoff’s 2012 album whose works anchor the show. Before you read further, let me tell you now that you really should attend this show.

There’s one performance left, Thursday at 8 p.m. And if you’re really lucky, there are still a few tickets remaining.

Now, back tothe show. The performance was announced last fall on St. Ann’s season schedule. But I didn’t think much about it. I had never seen the up-and-coming, Seattle-based ukulele player, composer, and arranger live. I’d heard a bit of his music thanks to the kind folks at his label, Brassland.

But for whatever reason, it didn’t really grab me.

But the other day, as the shows approached, there was a flurry of activity on Facebook that prodded me to reexamine my decision to skip this show. It was composer and Victoire founder Missy Mazzoli‘s Facebook RSVP that finally
pushed me over the edge. She’s a part of the pop-cum-New-Music
scene, and someone whose work I admire.

I figured if she was going, it was probably worth checking out.

When I did, I realized what a fantastic lineup of guest artists the show featured — David Byrne, Mirah Yom Tov Zeitlyn, Sondre Lerche, Zac Pennington (Parenthetical Girls), Nika Danilova (Zola Jesus), and Greg Saunier (Deerhoof), plus backup vocals from Jen Goma (People Get Ready, A Sunny Day in Glasgow) and Sam Mickens— so the show was almost certain to  be fun even if I didn’t really like Bischoff.

As it turns out, Bischoff was absolutely wonderful, and the show was easily one of the most entertaining and enthralling musical events I’ve attended in the last 12 months.

Bischoff is tall, lanky, had his hair in a modified pompadour. He was wearing a close-cut suit, white shirt, bow tie, and gold ankle-high boots. It was hard to clear my head of the idea that he presented himself as a mash-up of Pee Wee Herman and Chris Isaak. That’s not a bad thing, but it’s a very amusing thing. (Oh, and his suit turned out to be a little to close-cut. He announced after intermission that he had ripped a hole in the seat of his pants.)

Backed by drummer Saunier and 13 players from New Music ensemble Contemporaneous, Bischoff filled the first set with tunes of his own — mostly from his last album — plus a few covers.

After an auspicious start — his tunes and arrangements are rich and inventive — he threw me a bit with an orchestral cover of “Kule Kule” by the great Congolese band Konono Nº1.

Here’s his recording of the tune:

The arrangement and playing were solid, but to my ear it took a visceral party tune and smoothed it out into what seemed more like an academic exercise in New Music composition.

While anyone who follows this blog knows that I’m big a fan of New Music and its use of the sounds of many cultures, I didn’t see any point to simply covering the tune in such a Westernized way. It was entertaining, but didn’t add anything to the original or even make much of a statement about it.

But that, to me, was the only misstep — and a forgivable one, at that — of the evening, which ran almost 2½ hours, including intermission.

The second set featured two tunes by each of the featured vocalists — including at last one premiere, by Danilova — all arranged by Bischoff. It was a magical
evening. If you can get in to the show Thursday night, do it — any (legal) means necessary.