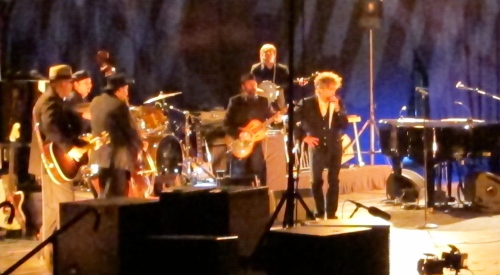 Nothing compares to your first time

When Bob Dylan hit the stage of the Webster Bank Arena on Friday night, July 19, I reached a major milestone.

It was my first time seeing the legend perform live.

Yes, you might think that given the underlying theme of this blog, I would have seen him before — probably many times. 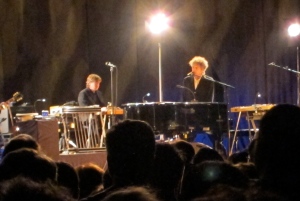 Sure, I treasure his music. I have many of his albums. A friend and neighbor of mine managed him once, way back before Albert Grossman hooked up with him.

But Dylan was playing arenas by the time I learned to care about him. And I just don’t like arena shows, the distance, the impersonality, the commercialism.

But when I saw the lineup for this summer’s touring Americanarama Festival of Music, I decided it was time to make an exception so that I could finally see Dylan. I figured that even if Bob was awful, I’d be able to cross him off my bucket list and still get plenty of value out of Wilco and My Morning Jacket. 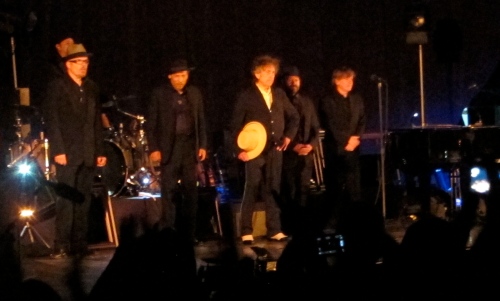 Americanarama’s Bridgeport, Conn., stop was supposed to be outdoors, at Bluefish Stadium, but for whatever reason, it was moved to the arena next door. While I regretted the move at first — the whole concept of a “festival” screams out for fresh air and sunshine — I came to appreciate it when I realized the evening would be oppressively hot because of the relentless heat wave gripping the region. At that point, being indoors seemed like a pretty good idea.

So I’ve scratched Dylan off the bucket list. But this was no pro forma checkoff. Dylan was in great form, deconstructing and reinventing some of his best-known tunes — and throwing in some of the lesser known stuff. He delivered 16 tunes in the course of nearly 90 minutes onstage.

He hasn’t done any proper singing in years — some would say he’s never done any — and this show was obviously no exception. He’s growled and croaked his way through the set, but in a very entertaining way. He exceeded my expectations in a major way.

But he used his band to provide the melodic and harmonic canvas on which he splattered his streams of vocal paint. Dylan painted his songs much the way Jackson Pollock created his famous canvases.

He clearly had a lot of fun doing it. He adopted a sassy pose when he played the harmonica, with one hand on his hip and the other holding the harp to his mouth. He bopped. And he even seemed, from a distance, to crack a tiny bit of a smile.

Dylan’s work took even some of the hardcore fans in the audience a little by surprise. For instance, his reinvention of the classic “Tangled Up in Blue” unspooled in a lovely yet unrecognizable way for at least 45 seconds before it became obvious.

I’d always heard that Dylan doesn’t interact with other artists with whom he shares a bill. But even that myth was shattered when he invited Wilco’s Jeff Tweedy and MMJ’s Jim James out to do a strong rendition of Blind Willie Johnson’s “Let Your Light Shine on Me.”

It was a great personal introduction to the man. Don’t miss this tour if you can help it. Remaining stops can be found on the festival website here (http://www.americanaramafestivalofmusic.net/).

Wilco created a strong lead-in for Dylan, with an exemplary set that brought out the ladies of Lucius — who were also featured guest’s at last month’s Wilco-curated Solid Sound Festival —  for three numbers. 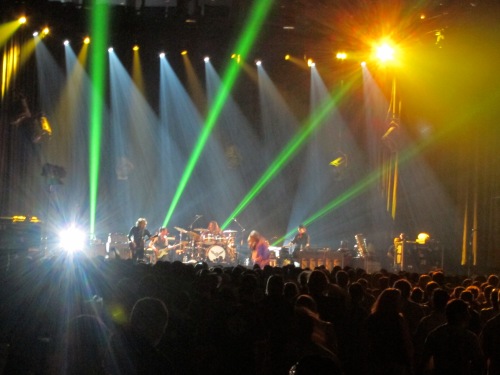 My Morning Jacket at the Americanarama Festival of Music in Bridgeport, Conn. (Photo © 2013, Steven P. Marsh)

My Morning Jacket did a full set, including a healthy dose of the band’s hits, after an early set by Ryan Bingham, which I arrived to late to hear.