The Feelies kicked off Independence Weekend, as they’ve been doing for ages, at Maxwell’s in Hoboken last night (Friday, July 1)

It was a homecoming as always at Maxwell’s since that was the band’s home club for its entire existence.

Last night was the first of a three-night stand. The hometown crowd was not disappointed, with The Feelies starting just a bit after 9 p.m., the posted showtime, and playing until almost 12:30, with just one short intermission.

Click through to the jump for more photos and info about the first night show. Also, check out a great Paste Magazine slideshow of a day in the life of The Feelies from their recent Philadelphia show at World Cafe Live. 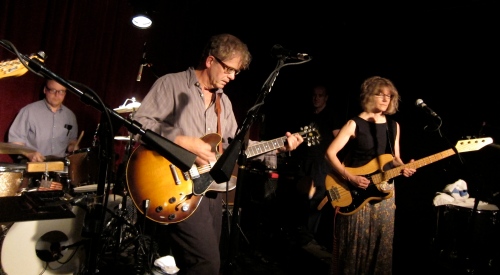 Stanley Demeski, Bill Million and Brenda Sauter of The Feelies.

Glenn Mercer, Bill Million, Stanley Demeski, Brenda Sauter and Dave Weckerman worked hard and delivered a fantastic set of more than two dozen songs, plus what seemed like an endless string of encores. (We lost count, but we think we remember the band coming back onstage five times at the end of the night.) The band seamlessly mixing in the new material with old favorites.

Glenn Mercer had a cheat sheet for the lyrics of Dylan's 'Seven Days."

As usual, The Feelies also gave the sold-out audience a raft of great covers, including the Stooges’ classic “I Wanna Be Your Dog,” Bob Dylan‘s “Seven Days” (for which Glenn traded his usual mumble for a deliberately Dylanesque mumble) and Jonathan Richman and the Modern Lovers’ “I Wanna Sleep in Your Arms” (for which Glenn did not adopt a Richmanesque pouty delivery, thankfully).

The Feelies are all business. There’s no storytelling and very little chatter. (“We love you guys,” was about the longest sentence to come out of Glenn’s mouth all night.) But there’s no disrespect intended. The Feelies like to get down to business, do what they do best, and do it impeccably. You can expect them to do the same tonight and tomorrow. (Tonight is probably sold out by now, but some tickets, which cost $24.99, remain for the final show tomorrow. You can get them at Tunes in Hoboken, Other Music in the East Village in Manhattan, or online.)

Last night was a family affair. Will You Miss Me When I’m Gone? spotted members of Glenn’s, Stanley’s and Brenda’s families there. And it’s likely there were other relatives we just didn’t recognize. And there were at least a couple of members of the extended family of Hoboken rockers: Georgia Hubley and Ira Kaplan of Yo La Tengo. 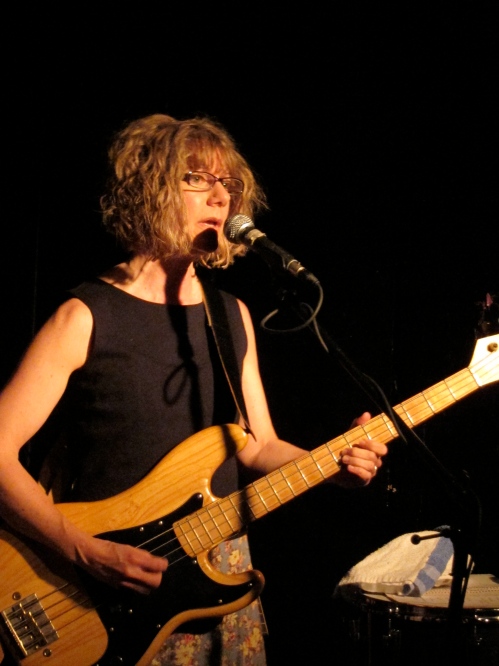