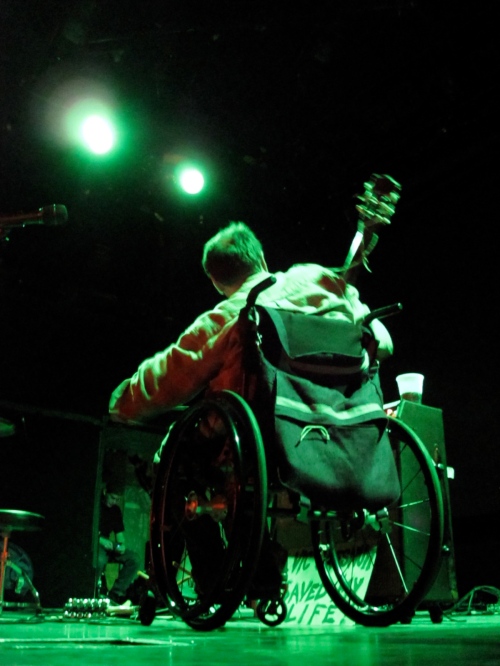 Vic Chesnutt wheels into the spotlight at the Bowery Ballroom in NYC on June 16, 2009. (Photos copyright 20009, Steven P. Marsh)

UPDATE: Longtime Vic Chesnutt collaborator Kristin Hersh has set up a web page for donations to help Vic’s survivors. Click here to donate. Kristin promises that all proceeds will go to the family to help cover the costs of Vic’s hospitalization and burial.

Singer-songwriter Vic Chesnutt, 45, who was confined to a wheelchair after breaking his neck in a car accident at age 18, died today after lapsing into a coma after taking an overdose of muscle relaxants earlier this week, family spokesman, Jem Cohen told The New York Times.

Vic's energy came out in a howl.

Kristin Hersh, a frequent collaborator with Chesnutt, said on Twitter that it was suicide. “No one knows much: another suicide attempt, looks bad, coma–if he survives, there may be brain damage,” Hersh Tweeted yesterday. “This time, it’s real scary: *this* time, he left a note, *this* time, he asked them to call me.”

The Athens, Ga., -based performer, had attempted suicide in the past. But the lyrics of the songs on his new album, In the Cut, seemed to signal a positive outlook on life. He even wrote directly about suicide in “Flirted With You All My Life,” writing “Everywhere I go, you’re always right there with me. I flirted with you all my life. Even kissed you once or twice… But clearly I was not ready. … Oh death, really I’m not ready, no no.”

Vic opened for Jonathan Richman at the Bowery Ballroom in NYC in June. He seemed as cantankerous as ever and full of life. After his set, he hung out with some younger men at the back of the room and talked about partying after the show. He seemed content, not as angry or hurting as in the past. Perhaps he had just learned to hide it better.

One response to “Gone too soon: Vic Chesnutt dead at 45 (UPDATE: Donate to help Vic’s family)”