In part the surprise comes from the band’s constantly changing lineup of musicians. And there’s always surprise in Bartlett’s decliately fractured Doveman songs.

The show at (Le) Poisson Rouge last night was billed as “Doveman with Sam Amidon and members of The National.” 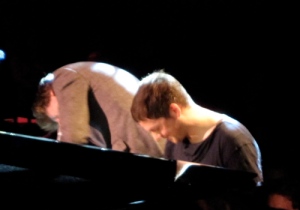 As it turned out, the unnamed members of The National (the Brooklyn art-rock band with which Bartlett sometimes plays) were guitarists Bryce Dessner and Aaron Dessner and drummer Bryan Devendorf — in other words, three-fifths of The National. But Thomas got help from even more players — Nico Muhly, Oren Bloedow of Elysian Fields, Sam and singer Dawn Landes —  to the point that he declared the ensemble the largest version of Doveman to ever appear onstage.

Doveman played a splendind set, mixing favorites like “Honey” with new songs from the upcoming album (click here for Doveman news from Brassland, the band’s record label). The band closed the set with pretty rocking cover of Tom Petty’s “Free Fallin’. The crowd, which was peppered with celebrities such as Josh Ritter and Justin Bond, reacted enthusiastically to every song.

For more on Doveman, plus videos from last night’s show, keep reading.

Thomas is an amazingly busy musician. Here’s a bit of insight posted on Stereogum last month:

Thomas Bartlett’s an incredibly busy sideman. In the past couple of months alone, we’ve spotted him backing the National, Bon Iver, David Byrne, etc., at Dark Was The Night Live and going headfirst into Antony’s Matthew Herbert reconstructions at Coachella. Because we can’t be everywhere at once, what we didn’t see was him performing with Nico Muhly at All Tomorrow’s Parties UK and contributing to the upcoming album by the Swell Season. Despite all that, or maybe because of it, he’s found time to move from the background to the spotlight for his Doveman project. See, for instance, “Breathing Out,” a track from his forthcoming (and still untitled) Patrick Dillett-produced followup to With My Left Hand I Release the Dead. The pretty hushed vocals and dense, delicate instrumentation are still there, but Bartlett manages to jump outside the bedroom and pack in a sing-along chorus. Or whisper along, I guess.

This was Doveman’s last show for awhile, as Thomas is going on the road with Antony and the Johnsons for a tour that kicks off in Amsterdam on Sunday and ends, as of today, on Aug. 14 in Goteborg, Sweden, according to Pollstar.com.

Sam, who opened for Doveman with a set of mostly traditional songs and had help on piano and drums from Thomas, also picked a cover for his final number, albeit a more ironic one — “Relief” by R. Kelly, a song widely seen as his response to his acquittal last year on charges of making child pornography.

The biggest Doveman band ever.

Here’s a video I shot of Doveman performing a new song. (It was shot with a handheld camera and a lot of people moved in front of me, so forgive the shaky quality.) If you know the title of this song, please leave a comment:

Doveman closed the show with a cover of Tom Petty’s “Free Fallin’.” Here’s another attendee’s video of that raggedly enthusiastic crowd favorite: